An Unrealistic Day with A Realistic Love in Imaginary Ways

I’m was an orphan child who was raised by my ninja trainer uncle. After he died, I had to go to capital. And... When I was in trouble, my lord saved and took me his side. He is so kind and sweat. I dedicated my life to protect him. I’m his body guard for three years.

If I say the truth, I don’t understand what is in my lord’ s mind nowadays. He has been weird since he went to a countryside. He met a girl there and all he can think now is that girl. When I ask this situation, he told me that it was love.

My hardworking lord has been so air-headed since that day. That made me worried. He is sleeping less, talking less but smiling more. He doesn’t want to do his official errands. And his mind is somewhere we don’t know.

But... He said that he wanted to do good things for his country so that his lover could live peacefully and happily. His smile after this was something that I can’t see anytime, though. Elders of the castle said love turned people to better and kinder ones.

I don’t understand what love is yet. I have never felt that way and I have never been loved in that way, either. A kunoichi doesn’t need that kind of feeling but I can’t stop wondering what made my lord so happy about that. But if my lord enjoys his life in this way, I will do everything for him and his lover.

Well... I can’t do that for now unless I return to my world.

Let me check the situation:

I was patrolling around the main castle. While I was passing the back forest, I saw an old lady. Her clothes were different from ours. She asked that I wanted to understand love and I made a mistake and told her yes. She opened a gate and sent me here by saying “Have a nice trip...”. So, I'm here.

I told the last part of this story to the boy named Kenji. Because first part was embarrassing. If he learnt a kunoichi was so selfish about learning the feelings, he would laugh that and think that I'm weird.

When I entered in this world, I felt so terrified at first. But somehow, I feel relaxed and safe with this guy. I don’t know why I showed up in his room but I'm glad the first person I met here is he. He is strong-minded, logical, kind and considerate. If he was an emperor of a nation, that would be won— Wait a minute! What am I thinking now?

We are walking somewhere now. After the school he asked me to wander around with him. When I looked at him, I can see his breath because of cold weather. Yeah, the weather is cold but can a person make those deep white vapors? I’m making those vapors when I go to the nervous missions in winter. Why is he so nervous?

When I tried to see my breathing vapors, since I tried to look at my own mouth, I saw my legs, too. Women clothes are weird in this world. A short skirt doesn’t protect you from cold but what are these black pants? Too tight for trousers... And they can protect me from cold surprisingly.

That is only a little thing to make me surprise in this world, though. There are a lot of things that I don’t know here. For example, look at the thing that girl was holding. It looks like a rectangular block but she can press the buttons which can’t be touched and talk with someone by using it. They call them cellphones. I wonder if Kenji has one of them. Maybe he would let me look.

Kenji has found a lot of deserts named chocolates here and there since this morning. A lot of girls gave him chocolates, too. At first, I did understand what was going on. Thanks to my fake story about coming from foreign country, I could ask this event. Then I had an idea about this. Maybe I have been sent here especially on Valentine’s Day to understand what love was.

According to chocolates in Kenji’s pockets and bag, you can guess he is a lovable person. As much time as you spend with him, you are getting sure he is. He is a gentleman who cares about even this kunoichi and gives his jacket to protect me from cold. If he is being honest with me, I'm sure this situation made him terrified like me. But still, he is trying to be calm and make me relaxed.

Maybe I won’t be able to return to my world and will be bother to him forever. Yet, he is willing to help me. I'm not sure every human in this world is so reliable and honest like him and I don’t think so either. I’m glad I met a lovable person like him.

Kenji brought me somewhere. A big hall was full of chairs... There was a big certain on the wall and we could watch something. Kenji said it was a movie and wanted me to enjoy the show. In movies people played roles to enjoy people. The movie was about the last ninja in the world. Scenario was terrible but so exciting.

After the movie, we ate something was called hamburger. Spicy meat was good but I don’t think I would drink the thing was called cola again. And there are a lot of delicious deserts in this world. Man, the humanity here is so lucky about this. This world, at least this country is more peaceful and easier than my world.

There they are... A couple holding their hands are walking in front of us again. Kenji said it was normal to see a lot of lovers today. But I wonder if Kenji is aware that we are making the same things as they do and going to the same places as they go. Even the waitress lady thought that we were lovers.

Lovers, huh? I even can’t imagine being a lover of myself. Who wants to make a tomboy kunoichi as their lovers? When I thought these, the couple in further us went in somewhere. I thought we were going to go there, too but Kenji hastened his steps until we passed that building.

When I saw Kenji’s red face, I looked at the building again. I don’t know what kind of place it is. There were different letters from a different language on board of the building door. I don’t understand why he was blushed. A sound is telling me it’s better if I wouldn’t ask a question about that.

Sun is setting and Kenji suggested to return to home. We wandered around but couldn’t find a gate to my world. We looked for it but I'm sure both of us know the gate won’t show up anywhere except the first shown up place.

Kenji bought new clothes for me. He is planning to tell his family that I am his friend from school. So, I had to changed his sister’s uniform. Fabric of my world has better quality but the clothes of this world is more comfortable. With this nice dress and coat, I watch myself on the shop window. I look no different from others.

I can see wide open eyes of Kenji’s mother. She got shock that his son brought a girl to house and introduced as her girlfriend. I did just like Kenji told me and greeted her in modern ways.

I guess Kenji has never brought his female friends to his home. I doubt he has brought male ones, too. As I saw his sister’s and brother’s room, Kenji’s room has a secret about the things he likes. And, he doesn’t want to show this to anyone, either.

He doesn’t want to tell me but I saw myself as a little doll in his bookshelf. When we went to a bookstore, I saw a picture of my lord and his lover, too. I think I'm a movie figure in this world. Therefore, Kenji knows who I am. This information wouldn't break my heart but I guess Kenji hesitates to tell me this. He is so kind.

It’s bath time. We can find hot water in this world easily. The thing that Kenji calls technology is great. Kenji showed me how I could use this water and the things which smell good called shampoo.

After the bath, Kenji’s sister insisted on me to talk and play with her. I’m ashamed a little because I wore her uniforms without her knowledge and still, I borrowed her big pajamas. We drank a sweet thing that she called hot cocoa. It smells and tastes good unlike the cola. And this cocoa is made from chocolates. I don’t know... Maybe that old lady sent me to fall in love with chocolates. It is the best food in the world.

Kenji’s sister is a player of a sport called handball. I have no idea about that sport but I can see how she loves it. She told me a lot of funny stories. Later Kenji got worried about my getting bored and stopped her.

When the clocks showed 11, we got upstairs. Kenji’s mother prepared a bed for me in Kenji’s room. Kenji was going to stay in his brother’s room. But I guess I won’t be able to spend one more night here. 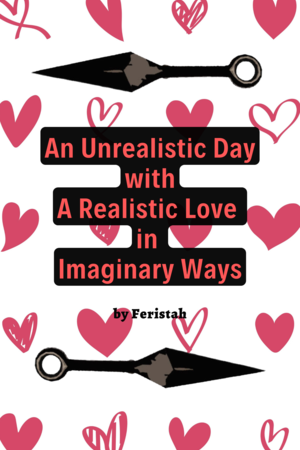 An Unrealistic Day with A Realistic Love in Imaginary Ways