I know full well how many times I’ve said that my hobby as a supernatural expert is nothing but a bother.

Even then, saying that I actually believe that would be kind of a stretch. Most times, I do enjoy helping people with their issues, and it’s a nice change of pace from my boring school life. Believe it or not, some incidents are genuinely very hard to solve, and they give me a much-needed excuse to use my brain.

There is no way in hell someone could come and call me for one of these ‘jobs’ during exam week and for me to be okay with it.

It’s not like my life depends on this unwanted hobby of mine. I don’t make any money off of it and it won’t ever qualify as a job even if I did charge for my services.

So why in hell did I agree to that ridiculous petition, the day before my last exam and with all the pent-up stress inside me at its peak?

I’m not even sure I understand myself. If anything, it might have been just a whim, a way to evade thinking about my impending doom.

Regardless, the story that came from that reckless decision of mine is one that I consider worthy of being told, so I shall do just that.

“Everyone, please, open the website I’ve written down on the blackboard with your phones. You will take a test to revise for tomorrow’s test.”

‘Ha. Joke’s on you, teacher. My phone is far too old to display that site properly.’

Ugh, I really could use that revision though…

As I swallowed my childish pride and went to ask the teacher to use the class computer, my phone started to vibrate.

Luckily for both me and the person trying to contact me, it was a message and not a call that had arrived. And the name of said sender was one I knew very well.

‘Hey, I need your help with something after school real quick. Meet me in front of my class, will ya?’

This guy truly was a bother.

But of course, I had no reason to believe he would cause me any major inconveniences.

So, like any friend would have done, I found myself standing in front of class 2-D right after the bell rang for the last time that day.

“Yo! Thanks for coming, dude! I knew I could count on you!” Nick called to me, the last of his group to come out of class.

“Never mind. Anyway, what do you need?”

“Ah, nothing major, sorry if I scared you. Wanted to know if you could come by a friend’s house today. She has a computer problem and I said you could be able to fix it.”

It really wasn’t something I could afford to do today.

I should just tell him I can’t and go home to study, I told myself.

But then again, tomorrow’s exam is a computer science test, so…

Thinking something along the lines of ‘screw it, what could go wrong?’, I finally replied to my friend waiting for an answer in front of me.

“Heh, can’t imagine you saying no to anything involving a computer… Well then, see you in an hour at the usual place. That should be enough time, right?”

“Yah, I imagine it should be.”

I parted ways with Nick, and went straight home.

I had just enough time to get there, eat, explain to my parents that I would be ‘going out to study at a friend’s house’, and gather all the basic stuff I might need to fix a computer.

And when I finally went out, just as he had promised, Nick was right there in front of my door.

“Let’s go then, shall we? I imagine you’ll want to be done quickly after all.”

Walking casually with Nick was something I hadn’t noticed how much I missed until I got to experience it again.

As nosy as he could sometimes get, he was the easiest to talk to from my group of friends. After all that had been going on recently on my side, it was relaxing to have someone with whom you could just laugh it all off.

But sadly for me, that pleasurable talk didn’t last nearly as long as I had wanted it to.

Only fifteen minutes after leaving my apartment, Nick suddenly stopped in front of a discreet small house.

“Here it is”, he said as he rang the doorbell.

Moments later, the door opened, and a girl our age I also knew from school - though I hadn't seen her around for a while - welcomed us in.

From the moment this cheery girl came into view, I already knew coming here was a mistake. This feeling of being right in between two people who’d rather be alone with each other… Ugh, gotta hate it.

“Weren’t you the one with a broken computer or something? That’s what Nick said just a while ago.”

“Ah, yeah! Yeah, my brother’s computer has been working weird recently. So you think you can fix it?”

“Thank you, really. It’s been bothering us for a while… Please, come in, make yourself at home. Nick, you’ll get him to where Philip is, right?”

“Yeah of course, no problem.”

He had no better idea than to call me over to help in the worst day possible, just for him to have some alone time with his crush.

Not that I would dare say it out loud. I’d just let this one slide and use it to torment him later.

The two of us followed Emma inside her house.

The girl went to the kitchen to bring us a snack – despite my insistence on having eaten mere minutes before – and Nick led me to one of the bedrooms on the back side of the house.

From what I could see of the house, it seemed this family was quite a modest one. The house itself wasn’t too big, nor did it have any piece of furniture or decoration that stood out. It actually felt like a really comfortable place to live in, unlike most of the other houses I had been to in the area.

After passing by some other rooms – most of them closed –, Nick stopped in front of one particular bedroom.

It just took a quick glance at the door to figure out what kind of person it belonged to.

Old worn-out posters of some animated TV show were taped to the wooden door, a small handwritten piece of paper accompanying what was most likely a gift in some old kid’s magazine.

We were invited in by its owner, who told us to sit down – though Nick politely refused, and instead went back to the living room. Guess I should let him have his fun and do as he pleased.

“Okay so, could you explain me what’s wrong with the computer? Give me all the details you think are important.”

I was met with a reply, but its speaker didn’t bother looking at me.

“It’s just working weird lately, sometimes when I try to open an app or a webpage it just turns off or does weird things. It’s kind of scary to be honest.”

Even before I had laid a finger on the machine, my mind was already racing trying to figure out the problem.

I could think of a few possibilities based on that description alone, of course – but saying any of them came close to convincing me would be a blatant lie.

I wasn’t really given much detail other than the mentioned above, so after getting permission to handle the computer myself, I started testing out possible scenarios to try and replicate the errors.

But it was weird.

No matter how much I tried, I could not get the PC to crash.

If anything, it looked like it had been cleaned and optimized to perfection a very short time ago.

“Hey, I am not getting that error you mentioned, and I’ve tried all I can think of. Can you come here for a bit?”

My young client looked confused at my confusion, as paradoxical as that may sound.

“It’s not like this. You need to open a specific app or web for it to die. Look-”

After looking at what I was doing on the screen, the computer mouse was taken from me, and the cursor was made to click on a very particular app – one that didn’t look any weird to me. In fact, it was a well-known messaging service I myself had a habit of using, and that had never once given me issues even in much less powerful hardware.

But just as it opened-

As it was about to finish loading, I heard a sudden short scream behind me. The computer had completely shut off by itself and started booting again, like it would if you pressed the physical “Restart” button on the front of the case.

Maybe the app had a recent update that broke it this badly? It would be weird, but nothing unheard of.

I opened my own laptop I had brought from home, opened that same app and – absolutely nothing.

I closed it and opened it a second time, wondering what the issue could possibly be, and-

‘FATAL ERROR. THE DATA FOR DISK C: HAS BEEN CORRUPTED. THE OPERATING SYSTEM CANNOT BE LOADED.’

What the actual hell??

My own laptop, one I knew like the back of my hand after years of using and abusing it, had crashed on me completely, and was now giving me an error message that made me break into a cold sweat.

Why wasn’t it turning on now?

I really didn’t have time for this. I was supposed to fix this damn computer, and go back home to study.

I’d figure out how to bring my own machine back to life later.

Now not even bothering to hide my anxiety, I quickly went back to Philip’s PC and opened the app once again.

And as if to confirm my worst premonitions, that computer was also left completely unusable.

It went on a cycle of infinite restarts without ever getting to the login screen.

By this point, I was completely sweating bullets.

And when I opened the bedroom’s door to let some fresh air in, I heard Nick running around, shock and confusion all over his face.

The moment Nick saw me show my head through the door, he began shouting at me.

It was Emma who replied, also looking extremely nervous and almost ready to collapse.

“All electronic stuff in the house has stopped working at the same time! Boom, bye, kaput!” 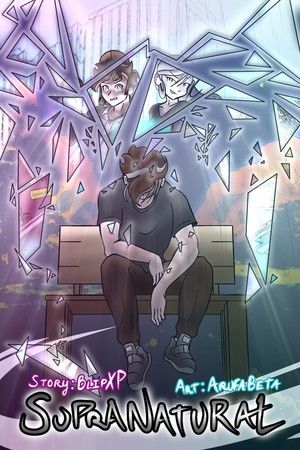