Jin, the last daughter of the Yurinhalt family, was to guard a good man to his execution. She first saw him in his chrome cell, bent glasses perched on his nose and a leatherbound book in one hand. When she spoke, he did not lift his head.

“Prisoner 082, Sir Dimitri Faust. The Federation has found you guilty on charges of high treason, and being a traitor to humanity. You have been sentenced to death.”

Dimitri Faust licked his finger, and turned the page of his book. If he heard her, he made no motion of it.

He perked at her name. “I thought the Yurinhalts were all dead.”

“Yes, now that you mention it, I do remember a surviving daughter. Will you do a dead man a favour?” He glanced up briefly. His eyes were burning emerald; a remnant of his years working with espers. “What is your rank?”

“I thought they would assign someone higher. Do you have any laurels?”

“The red and the black.”

“A veteran of the war.” He flipped another page. “How many homunculi does one have to butcher for the black laurel?”

“Officially? Or are you asking me how many I have killed?”

“The latter I suppose.”

For a moment, Jin glanced away. “Just one.”

Finally, Faust raised his head. Realisation dawned in his eyes.

“Ah fuck,” he breathed. Then, he laughed. “The woman who ended the war is sent to escort the man who started it.”

Jin scanned her I.D card, and the cell opened. She kept a hand on the pommel of her sword. “The procedure is known to you. We’re leaving.”

The book shut with a snap. Faust dragged himself up and presented his arms for Jin to shackle.

“Do not attempt to run,” she said. “It will not grant you escape, nor a quick death.”

“I know better than to dupe the Ashwalker.” A golden ring formed around his wrists. “Do a dead man a favour: you win the war for the Federation, and they only make you first rank? Why? I’ve seen Runners make elite rank for less.”

“They gave me a black laurel.”

“Ah, but of course. And how much good did that do for you?”

Jin gave no answer. She pushed him out of his cell and dragged him down the ivory corridor. His footsteps clacked and echoed as he waddled. Hers made no noise.

Stumbling, he asked, “do I have the right to a last meal?”

“Do I have the right to any last words?”

They stopped in front of the elevator. As Jin scanned her card, he said, “do I have the right to a pastor?”

“You’re a scientist, Faust. And I’ve read your file, you’ve never been to church.”

“No, no, no. That’s not why you’re surprised.” When the elevator opened, Faust stepped in first. He spun around to face her, pushing his glasses up his nose. “You’re surprised because I’m a murderer.”

“You’re putting words in my mouth. Words that aren’t mine.” She stepped in after him. “You weren’t tried for murder.”

“Every sin from the war is mine. Every drop of blood, every widow and orphan. Have you lost someone from the war? A sibling? A friend?”

“Then I was the one who took her from you.” He watched her for a reaction; stared deeply between those violet bangs. “Take your pistol and put a bullet between my eyes. You can tell them I attacked you.”

“I…” Jin breathed deeply. “I don’t want to fight anymore, Faust. I’m tired. If you’re looking for some catharsis for your guilty conscience, you won’t find it here.”

“Guilt?” There was a flash of anger. The sight of it surprised Jin. Somehow, it didn’t seem to fit Faust’s face, with his half-closed eyes and deadpan gaze; like wearing a shoe on the wrong foot. “Guilt implies regret, Ms Yurinhalt, and I assure you, on that front, I have none.”

“You gave them the Axiom.”

“And given the opportunity, I would make that same choice time and time again.”

“The choice of starting a bloodbath of a war.”

“Of saving a species from extinction.”

“What good did that do in the end?” she reminded him. “Millions of homunculi still died. All you managed to do was add another million humans to that monument of corpses.”

“I am not asking for your concession, only your empathy,” he explained. “I believed in peace, even if it was an uneasy one held aloft by the threat of mutual destruction. If you want me to admit I was wrong, then I’ll grant you that: I was wrong. I thought humanity cared more for peace than victory, and I was wrong. But do not mistake that for guilt. Every choice I made, I made because I believed it’d make this world just a little better. That it was the right thing to do, and that doing the right thing means getting your hands dirty more often than not.”

She glanced at him and paused for a second. “Then why a pastor?”

He looked at her, weakly smiling. “I’m scared of dying.”

Jin opened her mouth to speak when the elevator quaked. She slammed against the wall, Faust stumbling for the rails. Somewhere above, there was screeching metal. The white lights blinked on and off, then disappeared altogether.

Jin found her footing immediately, removing her pistol from its holster. Her eyes shifted to night-vision, rolling the darkness away and painting the room in shades of crimson. “What have you done?”

“Is this an escape attempt?”

“I wear fucking glasses, what makes you think I can see in the dark?”

Jin pushed him away. She aimed up at the ceiling hatch and fired. The lock shattered, leaving the hatch to swing open. “Stay here,” she ordered.

She leapt up and, with one hand, levered herself atop the elevator’s roof. High above were empty stretches of metal, lined with columns of sealed doors. The screeching metal rang again, and her head darted to locate its source.

An arm, deathly pale but blood-red through the tint of her night vision, pierced through one of the doors. Its slender fingers dragged along the sides of the metal and wrenched it open, forcing enough space for a second arm. Finally, a ghoulish head peeked through. High, protruding cheekbones cast vermillion shadows over its hollow cheeks; empty pits sat in replacement of eyes.

A homunculus. Its general shape was vaguely human; a warped parody or caricature, as if ripped straight from a toddler’s sketches. Yet, it was no more human than an ape, and with its two sets of jaws, Jin Yurinhalt felt little kinship.

The doors were crushed, allowing the rest of its anthropoid form to squeeze through, sticking to the walls like an oversized spider. Their eyes met, at least where she imagined its eyes were, and both its mouths screeched. 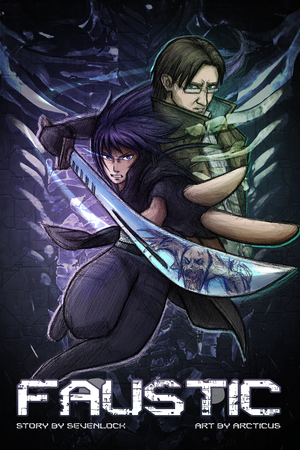