We'll All Be Dead by Winter

The rusty ladder groaned as Makoto climbed down from the hatch, a sliver of dull light trickling in to guide him. For a thousand year old ladder, one of the few remnants of the Before, it held his weight with ease. The transporter beside it, forever halted halfway through its course, reminded him of how life used to be. Bookmark here

The distant hum of conversations drifted over to him as he stepped down into the refuge with a metallic crunch, crushing the fragments of the broken transporter beneath his boots. Bookmark here

Safe in the subtle warmth of the underground, Makoto unclasped the respirator and pulled the balaclava off his head, letting it rest around his neck. With swift fingers, he reached into the right breast pocket of his jacket and pulled out the monocle he’d fashioned from his broken glasses.Bookmark here

The basic features activated upon making contact with his skin. A quick scan of the room revealed the temperature had dropped another tenth of a degree despite his best efforts to increase insulation and recycle the warmth in the air. Even the new insulation he’d salvaged from an abandoned factory today wouldn’t suffice for long. Bookmark here

Seven heat signatures moved between the crumbling pillars ahead of him, in the same place he’d left them. From his distance, all he could tell was that two were standing and the rest were either sitting or lying down. A wave of relief flooded over him at the consistent levels of the heat among all seven. Bookmark here

Sumire’s still maintaining, he thought with a hint of a smile tugging at his lips. The new pancreas I made her must be working. Bookmark here

He pulled the monocle off, letting it shut down to conserve its energy reserves, and continued forward. Bookmark here

The voices of his companions grew louder as Makoto approached, one in particular standing out among the rest. Shu was awake, that much would be clear even to someone with unaltered ears. To Makoto’s mechanical right ear, the near shouting volume of Shu’s exclamations were so deafening, he was forced to lower the sound sensitivity, something he was loath to do even in the safety of their hideout. Bookmark here

He had all but turned his ear off when Shu stormed past him, fuming but silent, having apparently lost the argument. Makoto turned to see him head for the ladder and rolled his eyes, silently hoping Shu wouldn’t bring any intruder back with him again.Bookmark here

Only one other member of their camp still stood when Makoto arrived, leaving him to assume that’s who Shu had been arguing with. She was the oldest of the group, the one everyone called Granny because nobody -- not even her -- knew her name.Bookmark here

She met Makoto’s gaze with a sigh and a shrug, indicating it was nothing more than the usual argument. “He’s still trying, every single day,” she said. Her voice croaked with its natural age, something she did nothing to hide. Granny’s face showed every wrinkle, every imperfection, and it made her all the more beautiful -- like a real human being. Only the scar down her neck revealed that she had been altered. Bookmark here

Makoto chuckled hollowly as he dropped his backpack. “You’re the only one who bothers arguing back with him,” he said, gazing down at the sleeping form beside Granny’s feet. “Everyone else just ignores him.”Bookmark here

“The value of respect may have been lost on you youths, but it’s still important to me,” she huffed. “Besides, someone’s gotta protect her while you’re out.” She glanced down at the sleeper, and her expression softened. Bookmark here

“Thank you for that, Granny,” Makoto said with a gentle smile, taking a few steps closer.Bookmark here

He knelt down and gently nudged the sleeper, who turned towards him and blinked hazily. Her eyes were the only visible parts of her face, the rest covered in thick layers of clothing, blankets, and a respirator. Bookmark here

Even then, he could still see the smile crinkle the corners of her eyes as Sumire recognized him. Bookmark here

She propped herself up on her elbows, and Makoto helped her sit up the rest of the way, gently peeling the layers away from her. Locks of bright red hair tumbled over her shoulders as she pulled back her own balaclava, unlatching the respirator in one swift motion. She was much more accustomed to it than Makoto, and wasted no effort in removing anything that inhibited her movements. These check-ups were the few times a day she was able to move freely, and Makoto could see from the joy on her face that she relished the freedom. Bookmark here

“I feel a lot better today,” she said with a smile. “I think I could even go outside tomorrow.” Hope glistened in her brown eyes as she looked for permission. Bookmark here

Makoto couldn’t outright reject her, so all he could say was, “We’ll see what your condition is like tomorrow.” Bookmark here

Her shoulders slumped as she deflated, but she didn’t protest. Bookmark here

Makoto reached for his backpack, unlocking it with a sweep of his eyes over the mechanism, and immediately pulled out his scope. He waited for her to unzip the center of her shirt and reveal the port he’d fastened where her belly button used to be. Bookmark here

Once the scope was tightly screwed into place, he donned his monocle again and connected it to the scope with a thin wire, letting the readings scroll quickly across his vision. Bookmark here

“Any pain today?” he asked, swiping aside the readings so he could see the organs within her abdomen. Bookmark here

Sumire shook her head. “None at a-” she started to say when Granny cleared her throat, a short but effective chastisement. “Maybe a little.” Bookmark here

Out of the corner of his eye, Makoto saw her sheepish expression, having been caught in her daily lie. He hid the amusement, quickly tamping it down so it wouldn’t influence his judgment. Bookmark here

“Around the new organ?” he asked and watched her nod. “That’s to be expected. There’s always an adjustment period.”Bookmark here

“See, Granny?” Sumire said, leaning back with her palms on the ground. “I told you it wasn’t anything worrisome.” She puffed up her chest a little, letting the pride show on her face like she believed herself an expert. Bookmark here

“You know you still need to tell me,” Makoto said before Granny could scold her. “I always need to check to make sure it’s working, and pain could be an indicator that something isn’t.” He waited for Sumire to nod before saying, “That being said, everything looks alright. Your new pancreas is still functioning well, but I’ll probably need to tweak your stomach in two or three days so it can keep up with the new organ.” Bookmark here

The way her hopeful expression deflated told Makoto she understood: No going outside for the following days. She didn’t complain, didn’t make a sound, but her thin lips pulled into the slightest pout in protest. Bookmark here

Makoto plastered what he hoped was a comforting smile on his face and said, “If you keep improving though, I’ll take you outside myself, okay?” Anything to give you hope again, even though we don’t have long now.Bookmark here

As soon as the weather turned colder, those with replaced organs --the Defectives, as they were commonly called -- would find themselves unable to maintain even the most basic energy levels, and with no more heat to convert into power since the earth’s core cooled beyond use, it wouldn’t be long before the lack of heat killed them all. Bookmark here

Makoto kept these thoughts to himself, though he knew he couldn’t be the only one to understand their grim reality. Bookmark here

“Really?” Sumire beamed with excitement, all but squealing. “I really hope this replacement works!” The unadulterated joy on her face betrayed her innocent youth. At only thirteen, she was one of the few who had managed to keep her spirits up in spite of everything that had transpired over the past three months. “Fingers crossed, this’ll be the last one before I can walk on my own again!” Bookmark here

If I replace anything else, you won’t have any human organs left, Makoto thought. He swallowed the words and instead pulled a syringe out of his bag. “Time for your intravenous nutrition,” he said, “Then you’ll need to continue resting, okay?”Bookmark here

“Okay,” she said, lying back to give him easier access to the port below her ribs. It was significantly smaller than the one on her abdomen, being used only for the daily nutrition injections. Bookmark here

I remember when she used to wince anytime I touched the area, Makoto thought. Now she doesn’t even blink. Her skin must have gone completely numb. He shouldn’t have been surprised, but the thought of his sister’s childhood friend being so far gone made his mechanical heart ache. Bookmark here

Still, Sumire maintained a smile on her face even as he withdrew the needle. Makoto sensed her searching his face, so he forced his expression to stay neutral until he could turn away, ejecting the needle into a compartment of his backpack where it would be automatically sanitized before the next day. Bookmark here

“Goodnight, Makoto,” she said softly, zipping up the middle of her shirt and replacing the balaclava over her head and face. She let Makoto fasten the respirator as she was already dozing off from the sleeping aid he mixed with her nutrition. The longer she slept, the more energy she could conserve.Bookmark here

As soon as she was fully asleep, as noted by her vitals on his screen, Granny beckoned him away. Once out of earshot of Sumire and any others, she said, “Tomorrow it’ll be three months.” Guilt made Makoto’s stomach constrict, only worsened when Granny added, “Sumire still misses her. She tells me every day how she’s looking forward to seeing Miyuki again someday.”Bookmark here

Someday. The word sent a chill down Makoto’s spine. To think that seeing my sister again is only a possibility, not a guarantee… Bookmark here

He realized he must have made a face, because Granny added, “Sumire doesn’t have long left.”Bookmark here

He had steeled himself against that months ago, but the thought still brought a lump to his throat. “None of us do,” he said, as though that would make the situation any more palatable, as though generalizing would allow him to put distance between himself and the harsh reality. “We’ll all be dead by winter.” Bookmark here

To put an end to the conversation, he reached into his backpack and pulled out a small vial. The liquid within contained enough calories and nutrients to keep Granny alive another day, having been specially formulated for her needs. She didn’t require as much care as Sumire, but her throat and lungs still demanded a certain level of maintenance. Bookmark here

Handing it to her, he said, “I have rounds to make,” and left, dropping the conversation before it could get any grimmer. Bookmark here

As he walked over to the other members of their camp to hand them similar vials, only one thought spurred him forward: I have to move faster; I have to find the hideout sooner. 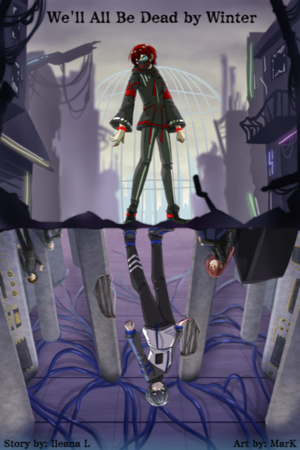 We'll All Be Dead by Winter