Another Way to Say Hello

“My apologies for being late.”

I give a polite bow of the head to my company as I meet with them at the corner of the street. Though Zenith himself had garbed himself in his customary dungeon faring clothes, Nicinon had vouched, as usual, to stay in her own personal clothing. But one feature now standing out glaringly from her is the enormous, silver war hammer in wrapped up in her hands and held close to her body. It reaches to nearly her own length but she seems to have no burdens carrying it by herself despite her petite frame.

“It’s all fine, of course. It gave me a bit more time to sort out a few things myself. You’ve got that habit of doing all the heavy lifting so of course we’re both just fine with you taking a little bit of extra time to yourself when you need it. You are the man behind the operation so I think if anything you should at least feel a little bit more entitled.” Zenith accepts my apology openly and with a dash of irony to go along with his response.

“I just want to know if you’re feeling okay.” Adds Nicinon, a timid line is drawn through her brows.

“I’m well. All that held me up was that I’d decided to go pay a visit. I’d gotten caught up so I’d ended up staying there for more time than I’d had in mind.”

A dour shade overcomes both of their faces. A bit sorrowful, a bit concerned.

“…That sounds about right. Y’know, you could have taken more time if you’d really needed it. If you were to, you could just let both of us know with a message.”

“I’d already felt unruly enough letting time slide as much as I had. But that’s besides the point. We have a job to do and the people need us. So why don’t we go ahead and get started already. If we make haste we should be able to finish up our duties at the usual hour.”

“Remember to take it easy for today. Do at least that much for us, will you?” Again there is a small flicker of humor in what Zenith says.

“It’s not too out of the ordinary for us to finish everything early. It is a Sunday so I don’t think there will be much for us to do.” Nicinon has a pleading look in her eyes as she looks to me.

“You’re probably right.” I concede with a small sigh. “She’s been doing better lately, but since I won’t be headed in that route, would be alright with checking on Sikina for me, Zenith?”

“That won’t be a problem. I’ll go by and say hello for you and let her know you’re doing well. Just taking a different route today.”

“I appreciate it very much.” I speak my gratitude then turn to Nicinon. “In exchange for going the simple way today, may I leave it with you to check on the businesses?”

“O-Of course! I’ll do my best! If there’s anything they need, I’ll let you know right away!”

“You don’t have to be on the point about it. Just make a list for me and send it when you have it prepared.”

She sends a firm nod of understanding back my way. Then with our matters discussed, the three of us take our separate ways and see each other off with a wave. Thus I make my way down the simplest path for our small knighthood’s patrols.

Long ago when the two had voluntarily joined with me to look over the well-fare of Ziodha we had devised a set of three paths to take. Most commonly I would take the larger share that lead way through both civilian housing and a portion of the businesses. Nicinon herself was mostly accustomed to taking the patrol I currently walk. This patrol consisting almost entirely of the easternmost civilian housings with only a touch of the outer business district. Though the middle path was most often shared between myself and Zenith as it more than anything was a walk through the bulk of the shops and restaurants of our city.

This 3 route system was made by our trio in order to allow anyone among us to swap out and take up a bit of the burden of the work taking care of the city. Though at first I was uncertain about anyone else joining me on my self imposed duties, Zenith had eventually talked me into trusting him and then Nicinon as fellow knights for the same cause. Though I had it in mind that we should be called community service members, the city itself somehow got the idea in their head to call us knights. And so the name of the Ziodha Knights had stuck despite that at the time we didn’t do most anything that was knightly. Our team of three had been embroiled in the war against Night.

While I take in the cool breeze, I begin to draw near to all of the civilians going about their day while the noon hour draws nearer by the minute. One by one greeting them, keeping my eyes on the watch for everyone, my patrolling continues on without a hitch.

Though that all changes the moment I begin to hear a set of galloping boots clicking and snapping their way closer to me at a pace of a sprint. I steel myself. Preparing myself to be engaged, twisting on heel, I’m nearly swept off my feet as I’m dealt a quick, weighty blow against my body.

Coiling around me with a tight grip nearly threatening to suffocate me, the source of my assault is topped with a simple cap on the head. Just beneath is swaying locks of pristine, chin length white hair. With the hooded outerwear and a set of sporty capri styled pants, she’s hardly a predator. The cute and small shape of her body lends more towards being one to protect.

“It’s good to see you today, Fleta.” I greet her in the face of her own customary way of saying hello to me.

Tilting her head to show me her cute and large crimson eyes, she beams forth with a full, shining smile.

“It’s rare to see you coming this way on a day like this! Today must be special!”

“I suppose you could say that depending on how you look at it. I take it that you were off somewhere before you’d wound up seeing me on the streets?”

“I was. But you know that I can’t just move along without saying hello to his majesty!”

“Again with that name.” I grumble lightly but with humor. “I know you like to cling on there for a bit as well, but I think it’d be a more comfortable conversation for both of us if we did away with the need to crane our necks. It’s no trouble to me either, but these greetings have their way of gathering the attention of passersby.”

“I don’t mind being seen with you like this. But I don’t want you to have a sore neck either.” She lets me go and skips a few steps distance from me. Her perky demeanor continues while the wide grin holds strong on her lips. “So, so, so! Did everything go good with the last expedition? Are you going to need my help here soon?”

“I believe it went well. We’ve discovered a new location though given the setting, I think that it’d be better if you’d stayed in Ziodha until further notice. Without any locks to open nor any mechanisms to disarm, it’d be just putting you needlessly in harms way.”

“That’s a crying shame. It feels like it’s been forever since I got to tag along and help out.” She puts her hands behind her head and feigns a pout. “You have to promise me that the first sign of treasure, you’ll take me with you! I’ve been keeping up on my skills so I won’t rust but it’s no fun if they aren’t being used at all!”

“I’m sure that we’ll find plenty for you to do soon enough. It seems that our new expedition will be leading us towards a castle. Seems like the kind of place that would have at least something that will make use of your talents.”

“Well then, you can count me in when the time comes! Anything for his majesty!” The cheeky grin on her face takes on a light, rosy hue.

“You were busy with something right now, weren’t you? I wouldn’t want you to lose too much time stopping by.”

“It’s alright for this much. I was just getting something for her majesty. I’ve got it packed away in my bag.” She plays with the flap of her messenger bag for emphasis. “Though I probably shouldn’t keep her waiting for too long. I just wish I could spend more time shooting the breeze with you. Truth be told, I’d been told by her majesty that it’s likely best for me to let you do what you have to and not interfere too much. Is it really that much of a problem?”

“It’s no issue to me so don’t worry about anything like that. Valorith is a very proper woman after all. Well, at least when it comes to you and your knights who serve her as a queen.”

“It’s always a surprise to think that t you, she’s an ordinary person. But that really goes for anyone who comes to you. I guess that’s why you’re so popular. Even if you are a king, you really don’t act that way at all.”

“Whatever you say, your majesty!” She prods me and sends me a wink while her steps begin to pick up in pace. “I’d had fun. I hope I can run into you again soon enough!”

For a few quick strides she jogs backwards, facing me and waving to me without a care in her mind. I reciprocate and wish her well before she deftly twists on heel and continues running through the streets and towards her destination.

“And run in to me again you will.” I’m left with a lighthearted chuckling as I observe her moving swiftly as ever she would.

Seeing her form continue to diminish in the distance, I’m given over to reminiscence. Among the memories I flash through, I recall a vision of her as she was trembling. Frosted over with fear to the bones as we’d walked through a set of cold, metal hallways lit up with an ethereal azure light.

It had been the very first time I had ever raised a blade to fight for another. Pitted against a warped and demented metal monster in a morbid, uncanny shape just shy of being human. Even now I can still feel the wrath that raged hot for that enemy as I’d slashed it into a heap of ashes. As I’d had held her unconscious body in my arms the very next moment I was frightened she would never return to me. But as I watch her continue running to her queen, I’m feel grateful that I can revisit that memory with a sense of relief in my heart.

It was a quite a first meeting for two, to say the very least. 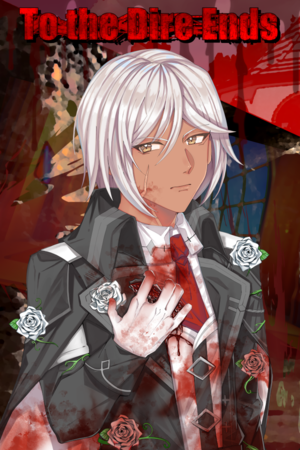