A Kappa Comes to Call

It’s 2 AM on my second night working the graveyard shift at my local convenience store.

Standing behind the register, I shudder as I think back on last night’s...special guests.

I didn’t tell anyone what happened.

I mean, how could I? Who’d believe a story like that?

That, while I was working at the convenience store, two people dressed up as a demon lord and an elf/maid came in and tried to make off with a pork cutlet sandwich. Yep. Anyone who heard that tale would call me a crazed lunatic.

And since this all went down in the middle of the night, it has that didn’t-actually-happen vibe to it. Anyone would think that I’d fallen asleep on the job.

You know, maybe I will just take the hit and pretend that the whole thing was a dream.

This time, I’m not sure if this evening’s customer is a dream or a hallucination. Maybe I should wake up my manager and get their opinion.

No, seriously, I think my heart stopped.

Standing in front of me is a green-skinned creature.

Every inch of this guy’s a sticky, slimy, green. Well, except for his eyes, which are gold.

He’s pretty tiny. Definitely less than five feet tall — and his head makes up most of that. The creature’s golden gaze wanders around the convenience store, soaking in its surroundings.

To top it all off, perched on the top of his head is what most people, I’m pretty sure, would consider to be a “plate.”

Huh. Maybe this guy’s a kappa?

Having a kappa as a customer on my second shift at this store would just be beyond stupid.

I sink down, resting my head on top of the register.

I tell myself that when I look up again, that’ll be a person. There will be a human being standing there. That whole green-skin thing? Just some weird trick of the light.

When I slowly raise my head, the kappa is walking around the store, his feet slap-slap-slapping on the tiles as his ragged, sopping wet knapsack bounces on his back.

This is real? You’ve got to be kidding me.

Oh my god, I can’t even. Someone save me from this convenience store.

I stare at the kappa as he goes about his business. That slap-slapping of his flipper-like feet is pretty realistic. No human would ever walk like that, that’s for sure. This guy’s got to be the real deal. Either way, I’m convinced that’s not someone in a costume.

I must be beat. I mean, it is two in the morning.

It’s only natural that you’d start seeing things that late at night, right?

The kappa makes his way over to the drink section, grabs a bottle of coke (of all things) from the fridge, then brings it slap-slap-slapping over to the register.

Wait, that’s not fair. I’m sure even kappa have times when they want to drink something sweet. I shouldn’t judge.

Especially not after seeing how carefully he’s cradling his precious bottle of coke. It kind of makes you want to cheer the little guy on.

I’m sure it’ll be fine. He won’t be anything like last night’s demon lord. There’s totally a wallet in that beaten-up backpack, right?

The kappa stretches up to place his bottle of coke on the counter, before sliding his knapsack off.

Atta boy! You got this!

There’s the telltale beep of the scanner as I ring up the item.

I wonder what kind of expression I’ve got on my face? I hope it’s some kind of semi-professional smile.

The kappa keeps his saucer-like eyes trained on me, without ever blinking.

Except that what he pulls out of his knapsack is neither a wallet nor a handful of yen.

...What am I supposed to do with that?

I stare long and hard at the cylindrical object. That is a cucumber, right? Like, the vegetable. Not some quirky wallet that’s shaped like a cucumber, but an actual cucumber?

Uh, seriously? No, really — what should I do with this?

Having not missed a moment of my very obvious confusion, the kappa’s face suddenly lights up in understanding.

Oh! Okay, I get it. He just mixed them up, right? His wallet and his, uh, cucumber? An honest mistake. Could’ve happened to anyone. Really, are all kappa this adorably clumsy?

My heart melts a little as I watch the flustered kappa rummage through his knapsack, only to pull out...three more cucumbers.

Dude, the problem wasn’t that you were short a few!!

The little guy glances back up at me with those impossibly round eyes of his, so I try and explain it again.

The kappa tilts his head to the side, questioningly...

Then goes back to fishing through his bag.

No thanks. I already know where this is going. He’s definitely going to pull out another cucumber. Please dude, anything but that!

It’s now 2:30 AM and I’m on the verge of tears, accepting cucumbers as payment.

The kappa happily collects his beloved drink, then slowly slap-slap-slaps his way out of the convenience store.

Expressionless, I silently make my way over to the break room. There, I pull out one hundred fifty-eight yen from my own wallet and put my new collection of cucumbers (now in a plastic bag) in the satchel sitting in my locker, before quietly zipping it shut. 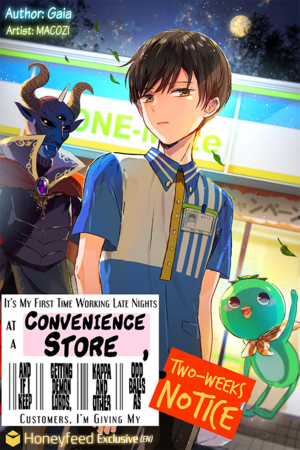