A match made with the Rising Star

Since this story involves Pro-Wrestling as part of its theme, there may be certain words associated with it that some may not recognize. Bookmark here

This "Prologue" will serve as a guide to every Pro-Wrestling term that appears in the story, along with a few Japanese terms as well since the story takes place in Japan. As more chapters are uploaded, more terms will be added. Bookmark here

* Single-Round-Match ------> Also known as a Singles Match. These are matches that go by the standard "rules" in Pro-Wrestling. A match will end when one of the following happens:Bookmark here

Pinfall - Pinning the opponent's shoulders to the ring's canvas for three seconds.
Submission - Forcing the opponent to tap out from a submission hold while in the ring.
DQ - Disqualification of the opponent for committing a foul.
Countout - The opponent remaining outside the ring for too long (10 or 20 seconds.)
KO - Knocking out or otherwise incapacitating the opponent

* Heel ------> A wrestler that portrays themselves as a villain. Their job is to do what it takes to be booed or jeered by the audience. Common heel behavior includes cheating to win (e.g. using the ropes for leverage while pinning or attacking with foreign objects while the referee is looking away), employing dirty tactics such as blatant chokes or raking the eyes, attacking other wrestlers backstage, interfering with other wrestlers' matches, insulting the fans or city they are in, and acting in a haughty or superior manner. The best heels are those who can instigate a negative reaction from the audience while also remaining entertaining to watch.Bookmark here

* Face ------> A wrestler that portrays themselves as a hero. Their job is to do what it takes to be cheered by the audience. Usually, they avoid cheating in matches and respect the rules, referee, and the audience. The best face wrestlers are often those who are naturally liked by the audience. Bookmark here

* Joshi ------> A female Japanese pro-wrestler. Their wrestling attires are often semi-revealing and extravagant with cute features like skirts and frills to give them an idol-like appearance. Nonetheless, they are professionally-trained performers. Bookmark here

* Selling ------> To react to something in a way which makes it appear believable and legitimate to the audience. Typically refers to the physical action by a wrestler of making an opponent's moves look impactful.Bookmark here

* Power-Wrestler ------> A wrestler trained mostly in physical strength. They are very strong and can perform grappling maneuvers that require a great deal of control. As a downside to what they invested in their training, power-wrestlers are usually incapable of acrobatic maneuvers, but there are exceptions. Aspiring power-wrestlers are usually tall because of the strength advantage their height gives them.Bookmark here

* High-Flyer ------> A wrestler trained mostly in athleticism. They often use acrobatic moves to make up for their alleged lack of physical strength. Aspiring high-flyers are usually short and had a background in gymnastics before taking up pro-wrestling. Their style also poses a high risk of injury due to the stunt-like nature of their moves.Bookmark here

* Shooting Star Press ------> A high-flying move where the wrestler jumps forward from an elevated position and presses their knees to their own chest, executes a backflip, and lands on their opponent as if performing a body press. It's known to be very risky for both the wrestler and their opponent due to the lack of control after execution.Bookmark here

* Moonsault ------> A high-flying move generally attempted from the top rope. In a standard Moonsault, a wrestler faces away from their supine opponent and executes a backflip landing on the opponent in a splash/press position but facing towards the elevated position. It has many variations.Bookmark here

* Corkscrew 630° Senton ------> A variation of a high-flying move called the Diving Senton, where a wrestler tries to land themselves back or buttocks first on the opponent's stomach or chest. A Corkscrew 630° Senton is a complicated version where a wrestler faces away from the ring on the top turnbuckle then jumps and performs a 180-degree mid-air turn then flips 630-degrees while still in mid-air before landing on top of their opponent.Bookmark here

* Promo ------> An in-character interview or monologue from a wrestler. Their choice of words are often based on their personalities to make the promo feel more real and interesting.
Bookmark here

* Meet-and-greet ------> An organized event during which a celebrity, politician, or other well-known figure meets and talks to the public. Bookmark here

* Bump ------> To fall on the mat or ground. This can also refer to any stunt a wrestler performs that is guaranteed to hurt for entertainment purposes.Bookmark here

* Lock-up ------> A portion of a match, usually the very start of the match, where two wrestlers join together in a collar-and-elbow tie-up. This is usually how a match starts if the opposing wrestlers don't have a storyline feud or at least intend to fight fairly.Bookmark here

* Shining Wizard ------> After stepping off the opponent's raised knee with one foot, the wrestler swings the other leg and strikes the opponent's head with either the side of the knee or shin.Bookmark here

Bento Box ------> A compact container designed to hold a single serving of rice and several side dishes.Bookmark here

Oyakudon ------> literally "parent-and-child donburi", is a donburi, or Japanese rice bowl dish, in which chicken, egg, sliced scallion (or sometimes regular onions), and other ingredients are all simmered together in a kind of soup which is made with soy sauce and stock, and then served on top of a large bowl of rice.Bookmark here

Onigiri ------> A Japanese food made from white rice formed into triangular or cylindrical shapes and often wrapped in seaweed.Bookmark here 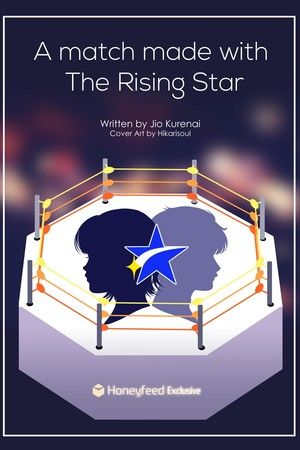 A match made with the Rising Star