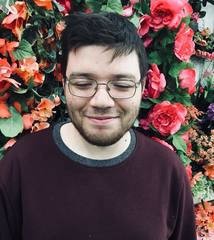 Luciano Gonzalez is a historian and student of peace & conflict studies at the graduate level. When he's not writing a story centered around a young boxer who was killed & reincarnated in a world built around monsters, magic, gods, and zemi, he's tweeting, filming videos, and generally just having a good time. Follow him on Twitter & subscribe to him on YouTube to connect with him and chat about your favorite gods, goddesses, and monsters.

registered at: May 21, 2018
Roles
Achievement Badges