“So, what’s he doing?”Bookmark here

Uncle sat on a monoblock in total silence. He had his eyes shut, his breathing fine, and his focus spiraling in between his feet. He imagined himself sitting in the middle of black and white space—his small living room—with looming clouds setting the scene and the floor reflecting it like a mirror. Bookmark here

He ignored the smell of blood and sweat mingling in the air. He narrowed his brows. Someone farted. He didn’t dare react to that, but Enteng was giggling. Bookmark here

Back to the task at hand, he needed to internalize this scene. He breathed and almost choked on his saliva. He lifted his chin and parted his mouth. The air tasted like shit now. He imagined the world in his mind’s eye burst in color, gaining the vibrance that he expected as his wet hair flapped to the rhythm of the fan. The sky turned blue. And the floor flashed to mirror the clouds. Here, he hummed his opening song. Slowly.Bookmark here

His mom was dead. Someone broke into their home. He met God. He became the truest gamer. And yes, he’s internalizing himself to be the protagonist of this anime episode. Bookmark here

He didn’t see Enang hugging herself, cupping her chin with an utter sense of disgust. He could feel it, though, but that wouldn’t stop him. There was something like a knock on the back door, but that didn’t matter.Bookmark here

Enang frowned. “I hate that I know what’s going on,” Enang answered Enteng with a slight frown on her face.Bookmark here

“For now, yeah. Will he wake up with red eyes and black scleras and have an insatiable taste for flesh? That’s what we’re looking out for. But don’t worry. I’ll cut his head off when it comes down to it.”Bookmark here

“I’m fine,” Uncle interjected. He winked at Enang, and Enang shivered. “But you get me, Sis.”Bookmark here

He gestured to the space in front of him. He moved his fingers like he’s typing something on a keyboard.Bookmark here

Uncle swiped the air like he was pushing a text box over to Enang and Enteng. Bookmark here

“I’ve invited you to a party. That way, I’ll be able to know where you are, and how you’re doing.”Bookmark here

“Ding.” Uncle nodded and smiled at Enteng. “Much appreciated.”Bookmark here

Enang looked at the space in front of her. She exchanged glances with both Enteng and Uncle, but her eyes found to rest on George. An image of her screaming while ripping her hair out flashed. It didn’t sound so bad right now. She took a sharp breath through her gritting teeth. She shouldn’t be happy about finding peace in the presence of a cactus that seemed to smile at her. Bookmark here

“So, it’s voice-activated?” She waved her fingers, trying to imagine where the accept button was. Bookmark here

That didn’t help her at all. And he sounded so proud. “Alright… I’ll accept it, then.”Bookmark here

Enang nodded, retreating back at the corner of the couch and wishing that she could just go outside. Bookmark here

“So, what happens now?”Bookmark here

“We kill them. We kill them all. I have no idea where they came from, but they entered from the back door, which you sealed,” he pointed at Enteng. “You shoved the fridge in it.”Bookmark here

“After putting the table and some other cabinets...”Bookmark here

“To keep us extra safe.”Bookmark here

“To make sure that no one was there.”Bookmark here

“And screaming when no one answered you.”Bookmark here

“Because we can’t be sure. They won’t answer if they’re enemies. And if they’re friendly,” he pointed them at the front door. “they would use that like normal people do. Right, George?”

They all looked at George. Uncle and Enteng nodded like he was saying something profound. Enang glared at both of them and hid it with a confused but innocent smile. Bookmark here

“Yeah, what he said,” she added. Bookmark here

Enteng raised his eyebrows.“Wait, you were talking with him?”Bookmark here

“What?” Enang screamed internally like she stubbed her toe at the leg of a table.Bookmark here

“Of course,” she chuckled in deep panic. “He just said something about asking if you guys think that it had something to do with the stuff that happened to us?” Fuck them both, honestly. She smiled at Enteng. “I think that’s what he’s trying to say… I feel like we’ve established some kind of connection…” She licked her lips to find her words. “When we’re trying to… When we’ve fought together.”Bookmark here

She bashed her head against the metal gate and screamed about dying. But that counts as fighting, too. Definitely.Bookmark here

“Woah…” Uncle focused on the cactus and stretched his fingers around it. He narrowed his eyes and whispered some words as though to cast a spell. Bookmark here

“This… is a cactus familiar. And it’s a high-level one to boot.” Uncle gave them a low whistle. “Look at these stats.”Bookmark here

“They’re numbers,” Enang followed. “They don’t mean anything at all, don’t worry about it.”Bookmark here

“But it’s about George.”Bookmark here

Enang placed her palms together to pray. Self-control. She had it. These guys were insane, but they could protect her. She just needed to endure this mild insanity and find her peace with George—she screamed. That was wrong. Bookmark here

“It seems that George has a special attack that could stun the target and it triggers when it enters a certain range.”Bookmark here

“This is pretty amazing.” Bookmark here

“I think George is very happy too…” Enang hurried to change the conversation. “But I think that he’s asking about what we should do now.”Bookmark here

“Well…” Uncle rested his back against the monoblock. Bookmark here

Uncle kicked himself out of the monoblock and raised his knife. Enang pulled her machete and jumped to the back of the couch for cover. Enteng grabbed George, petted him, and breathed as he retreated back to the comfort of his seat. They were ready for combat—against a tall man with long wavy hair that skittered into their front door. Bookmark here

The tall man shrank and swallowed his words.Bookmark here

“Identify.” Uncle started. “Ding. What’s in front of you is a human stranger. His intentions are unknown. He is currently afraid,” he looked down as he continued with his robotic tone. “very afraid about pissing himself, probably.”Bookmark here

“Well, I’m Joey.” He nodded at Enang and tucked a bit of his air behind his ear. “I have a few people behind me, right outside, and we’ve been trying to go from door to door to save everyone we could. Someone’s following us. We tried going to the backdoor. We spent an ample amount of time unlocking it, only to find out that it was blocked by a refrigerator and shards of a broken table. Please. There are monsters following our trail. Please tell us that there are other people on the other side.”Bookmark here

“Ah.” Enteng looked around the living room and put his hands together. “It’s just me, Enang, Uncle, and George.” Bookmark here

They all looked at George for a second. Joey’s eyebrow twitched like something was wrong, but he didn’t say anything. Enang smiled a bit.Bookmark here 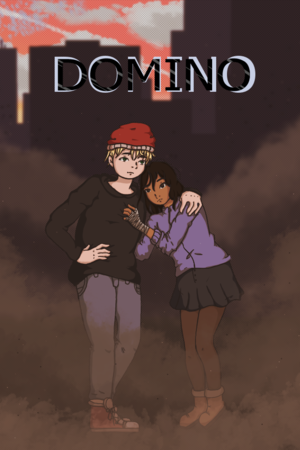