My Waifu, Here Is My Love Poem

With head sunk and heart shattered; I began to show you the town.

Your eyes lit ablaze from the many modern conveniences.

Those that never existed on your world, and you could not have known.

“Dan,” you asked me, “why does that crowd gather at the entrances?”

“A film. A sort of moving picture with a story, shall I take you?”

We got in line, and got strange looks. Something which would have consequences.

The film was boring, I was happy to get out on the streets anew.

You, however, could not keep quiet. Excitement blazed in your eyes.

To say I was unhappy or disappointed would be untrue.

As we walked, you spied some homemade heart-shaped pies.

A valentine’s tradition for which a small bakery was renown.

“Would you like that?” I asked after your belly let out cries.

“Hmph,” you turned your head, “I wouldn’t mind going inside.”

I laughed and led the way, all while you feigned disinterest.

It wasn’t a bother, your anime had already shown me your stubborn pride.

When they brought the pie, your face was the purest.

A cherry flavor that reminded you of the world from which you came.

As you gracefully ate; I knew of all in this world, you were the fairest.

We set out again, and your excitement covered you as a flame.

I had to stop you; such powers could spell trouble.

You said: “Why not? In my strength I have no shame.”

“Being lit on fire might only make their concerns double,”

I said gesturing to the nearby crowd that pried.

As the flames dimmed, I hoped their concerns floated away like a bubble.

I showed you the rest of the town with earnest;

And you asked more questions than I had answers.

My life had reached a point I could say was the funnest.

With the day near its close, the last stop was to see some flowers.

The town was famous for its beautiful domed field, and you said you “had to see!”

So, we went and enjoyed a surprising show of petals and dancers.

We went back home and wondered if one might believe you were from oversea.

I had not considered, foolish as it might seem, that we would need a story.

“A waifu attracts too much attention, don’t you agree?”

For a moment, you looked all around my dormitory.

Then you said: “Your world may be the sternest;

But I can abide by the rules of your territory.” 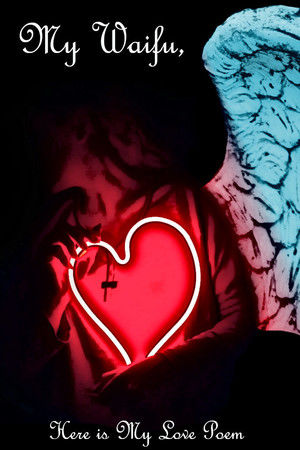 My Waifu, Here Is My Love Poem