Today, Miku lost herself in a realistic reverie again.

Warm, strawberry-scented breaths tingle her nose. The sound of raspy sighs and the melodious beat of the heart. There was no doubt that she was about to be kissed. She probably had butterflies in her stomach, but you could also say she felt the rose-colored cherry blossoms bloom inside her.

As the lips felt closer, Miku arranged hers in a pout, her lips soft and sultry, expecting another lips to melt in hers. A split second passes by like torture but as they said hunger is the best spice, or perhaps, the best sweetener.

The scent circled around her nostrils as they slowly poured themselves onto her lungs, everything of it as pleasant and sweet.

Until the roosters made a sonorous war cry.

The kind of ringing that made her body convulse in disappointment, the kind of war cry that parted reality and dream like it was the Red Sea itself. The roosters must have had their time sabotaging her quixotic reverie with a cry that could pierce Miku’s eardrums and shake her brain, if she had any.

But at last, our heroine is awake.

In a languid pace to awakeness, she touched her slightly pouted lips and turned red.

“Nee-san you should probably change your ringtone.”

“No, you DID NOT see anything.”

Our heroine is not rushing to school with a toasted bread on her mouth, instead, you can find a piece of chicken leg with mustard dressing and a few dips of wasabi on her face. According to her, it's the best combination possible- ew? Did you just say, “EW?”

Oh, it’s just another plebe who failed to fathom the transcendence of chicken leg with mustard dressing and wasabi. You disgust me beyond imagination and I am speechless at this unimaginable fuckery.

Anyway, moving on, today is the renowned school festival episode which every school anime has, quite weird for a first chapter? It’s okay, you’re probably weirder, I know who you are, wasabi hater.

Who the heck even is Katsura? I can’t believe you weebs, you should probably touch some grass or something, it’s a filthy reference if you ask me.

My name is Katsura Miku, I’m actually running late right now for the rehearsals but currently, I am not running but walking calmly so I am not running late, just late. I can not risk my beloved chicken with wasabi to fall on the ground just because of some rehearsal I actually need to rush to. And actually, I pretty much need to run because reality just slapped me to the face. TODAY IS THE SCHOOL FESTIVAL, which means TODAY is where we present our play. Oh, yes. I’m actually in the drama club and would you believe me if I tell you I’m the best actress in the school there is? Of course not, because I sure am not. But I managed to land the main role for a reason god knows what.

What a fine morning to be called a bitch, the weather must be preparing one hell of a rain today because believe it or not, everytime Hayato calls me a ‘bitch’ it rains, if it’s on caps lock then it RAINS, I do not just mean RAIN but a super downpour RAIN. So that means, it will RAIN today. I’ve met Hayato since I was in my mother’s womb, we kicked some ass together, literally, and ever since I’ve escaped my mother’s womb, I have been dealing with Hayato’s shit every single day, and he has been dealing with mine. Seems fair.

Hayato is a skunk and his attitude is as smelly as his butt. I’m a woman, and I should not speak vile of others with a horrifying language but that is what he is. He is an unbelievable creature akin to a skunk but I love skunks except for the fact that they are smelly. Do not ask further. Period.

The rehearsal went smoothly, what do you expect? I’m the female lead and I act pretty well. I loved to act ever since I escaped my mother’s womb; and Hayato would always make me costumes. Hayato loves sewing and is the president of the sewing club, sounds pretty cute for a guy but a skunk is a skunk. But he’s MY forever skunk and I wouldn’t have it any other way.

“Katsura, do you have a minute?”

Matsuma Kirei, the president of the drama club and the play director approached me as I was about to take a sip.

“Would you mind if you replay the fifth scene with Kitayama for a bit?”

“Come on, no need to be so cranky… Kitayama!” He raised his hand as if to call a certain guy’s attention.

Replaying scenes is not a problem, but it had to be the kiss scene with HIM of all people. Well, we’re entirely not gonna do it but it’s just weird… taking into consideration the dream I had this morning.

Kitayama Yato. A typical aloof, silent type ikemen with black slicked-back hair that just screams very intimidating. And his delinquent role? It is NOT very good for the heart. His eyes are as deep as the wishing well girls go to when they wish to go out with him. Kitayama is the male lead which means I have to deal with the stares of jealous girls who are victimized by his ikemen capabilities. I don’t really know anything about him aside from the fact that he’s about to kiss me now and I look like a fucking ripe tomato harvested from South America.

Normally, I’d stay still in this scene as he’d kiss me but everything just flashes back to the dream I had a while ago. And I may have distanced my face from his for a bit.

He smells so nice.

His raspy voice sent shivers down my spine. Paired with his soft fingers slightly cupping my chin. His lips glisten as it makes its way near mine.

Dear God, I am at my fucking limit.

I AM AT MY FUCKING LIMIT.

What took you so long sicko Kirei!

“Oh! What do we have here? Am I just imagining things or is Miku flustered?” Kirei giggles.

He moves closer to examine my face filled with blood rush. I’m anemic but what the hell is wrong with my red blood cells today?

I’m not flustered! It’s just that the dream I had made it 100 times weirder! And I feel a bit wuzzy, I don’t know!

“Kitayama, I think holding her chin adds a more romantic effect so do it on the final play.”

With that he sashayed his way out of the room.

Kitayama stepped closer with his face a few centimeters apart from mine.

We’ve reenacted this ‘kiss’ scene multiple times but… his eyelashes are really, really long. His skin looked glass-like, it felt so fragile that it would break with a slight touch. His eyes… It wasn’t as deep as I imagined, but somehow it made me feel calm looking at them. Ahh… I see, my description of him earlier did not do justice to his striking features. He’s not just handsome, he has the ability to make you feel things you can’t describe. For some reason, I felt kind of weak.

His cold hands made their way to my forehead, brushing my bangs aside.

The feel of his fingertips gave me a glimpse of euphoria. Any minute now, I could melt from the slightest touch.

But what is he doing? We don’t have this kind of scene in the play.

As if he had some magic to ripen tomatoes every time he touched them, I am enchanted by the feel of his hand on my forehead.

Eyes are the window to the soul and I think I just felt like his cold stare permeate the very essence of my being. Five whole seconds and he doesn’t let go of me…

“I think you have a slight fever. You should rest up.”

It must’ve been one hell of a fever that painted my face in deep red. I should rest up, I guess… 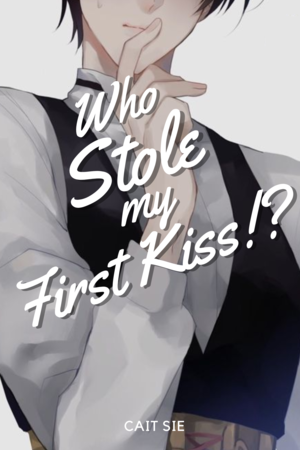