Well, it wasn't only the streets that had changed. Alongside all the replaced stores, renovated houses and all kinds of new plant life decorating the streets, I myself had changed quite a lot.

Last time I was in Japan, I was just a small and fragile child of twelve years old. Now, you might be thinking, you're still a child, it's only your first year of high school, plus—your height is still not all that grand, standing at 165 cm… But that’s only because you haven't seen me before I left for Canada.

I am not sure what it was— the plane ride, all my complex feelings about leaving Japan, the sudden climate change (or most likely, a combination of all of the above), I got seriously sick during my 7th grade. That sickness, which lasted a solid four months, inspired me to take better care of my body.

I loved eating snacks, I cut them down a considerable amount. I loved staying up, I completely changed my bedtime schedule. But perhaps the biggest difference was that I had picked up running as a hobby. That, combined with the occasional strength training I did, had completely reshaped my body into a much healthier and muscular one.

I’d say, I have the rights to feel a little proud of myself.

Enough of the past. Let's talk about the moment. So here I was, taking a weekend run along the streets that were supposed to be familiar to me—to my surprise they were anything but that. I wondered what had caused such drastic differences even though it hadn't been that many years since I had last been in here. Maybe it was just my memory playing tricks on me? This many changes in one place was simply unnatural.

I shrugged and my thoughts quickly got replaced by various worries about my current school life. Even though I tried not to show it to my family, suddenly going back to Japan had caused a bit of a shock to my system. Plus, I thought that maybe me studying in Canada would make an icebreaker topic with my classmates, however it only resulted in simple chit chat, and no friendships. I was cool with everyone in my class and after school club, with small exceptions here and there, but even after two weeks, I couldn't click with anybody just yet.

Would that change with the third week?

Well, something that really had to change as soon as possible was the fact that I needed glasses. I don't have the worst eyesight, but it was starting to become a bit of a problem at school due to me mistaking letters and numbers on the chalkboard. I had quite the shock comparing my notes with my desk neighbor, Rena.

I reckon she started to dislike me after this incident, probably thinking I am a big fool. I couldn't tell her the reason because it would only cement the idea that I am a big fool into her mind more.

The truth is, I had thrown my pair of glasses into the trash bin.

Yes, I really did such a thing.

It was an accident, though, I was sleeping and somehow my arm must have knocked them off the nightstand into the trash bin. My mom wanted to throw out the trash first thing in the morning, so she crept into my room while the sun was barely rising, took out the trash not perceiving the absence of my glasses on the nightstand and…

Well, I can only hope my old pair enjoyed their ride to Trashland.

At first I didn't want to bother my family about a new pair of glasses, as we already had many expenses dealing with relocating back to Tokyo, but my mom had already booked an optician appointment with a tearful apology—she was a bit of an emotional lady. I can easily say I got my softie streak from her.

In summary, I had my new prescription papers and all I needed was a new frame. Now that I think about it, maybe it is just my myopia fooling me about all these differences in the streets. It really wasn't all that important, but my mind just couldn't let go of this eerie feeling, something was definitely off—suddenly I ceased my running as I squinted towards a shop that was definitely not there before.

As I was trying to understand what this small shop and its many rows of various and quite random looking display items were about, the shop owner uncle noticed me standing and waved his hand, persuading me to come take a look inside.

Well, I had been caught just standing and staring, and I felt curious about this new addition to the street, so I crossed the road to arrive in front of the shop. A closer (thus, clearer) look at the shop name which was plastered on the window with a very old looking parchment of paper, revealed it to be "Omoide no Kottouhinya"—Antique Shop of Memories.

I felt such a strong aura emitting from inside, and my whole body felt like it was being sucked in. With legs moving on their own, I barely had any thoughts of being impolite to the store owner, so with just a small nod of my head sufficing as the greeting, I stepped inside the magnetic shop. 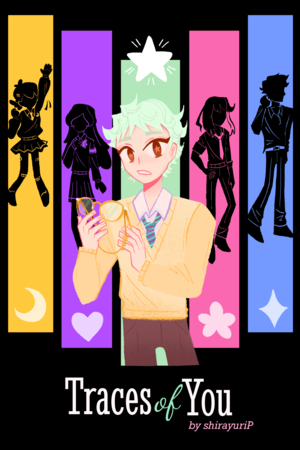