Volume 1, Prologue: It Turns Out They Exist

Parable of the Renegades [BETA Version]

Feel free to leave a comment below whether you got a random question, or if you have any constructive criticism to help me improve! A "Like" would definitely be appreciated too!

Knowing that I have readers can make the sun shine for me on a rainy day! With that being said, I hope you enjoy the chapter! Have a great day! ;D

The first six chapters are based on the final version, as this novel will be getting it's official release soon!

Please look forward to revised chapters, new scenes, and illustrations depicting events! If you feel like this story has potential, please buy the official version and give it a read when the time comes! ;)

It all started with the revelation of a secret.

All over the planet, a broadcast began. Every person, from those sitting on the couch at home to those walking on the streets, stopped what they were doing as their eyes directed themselves to the closest source of media.

Every television and big public screen interrupted their current programs to show a single man in live-streaming footage. Shot with a dilapidated camera, the video sizzled with static feedback every few seconds, an aesthetic that unsettled some of the viewers.

He sat on an ordinary wooden chair, leaning forward with his hands clasped together. The tattered suit and necktie he wore brought up the guess that he’d just emerged from a recent scuffle. His brown hair had been swept back, leaving a few stray bangs hanging in front of his clean-shaven face.

“Hi there.” His amber eyes relaxed as his tone, gentle and a bit shy, brought in most of the planet’s attention as he raised a hand to give a slight wave to the camera.

“My name is of no importance. All you need to know about my identity is that I’m just another person who does his best to contribute to society and pay his taxes regularly.”

Static feedback buzzed in the video as he wiped a bit of sweat off his forehead with a handkerchief.

“I do not wish to waste your time, but I would like to take this opportunity to relay an important message to everyone on this planet we share.”

He raised a finger, shut his eyes tight, and tilted his head down, signaling every viewer to give him a few seconds.

Then he lifted his head back up and opened his eyes.

The entire world remained silent; no one had any idea on what to say next. Both of the man’s eyes that seconds ago looked no different than most of the people anyone could meet had taken on an altered appearance. The whites of his eyes had regressed to a darkened grey as his irises glowed a brighter shade of amber. Images of black needles with varying length pointed toward his pupils, which remained the same as they were before.

“Hear me now, those of you bearing witness. We are hidden among the lot of you.”

He spoke again, but his voice had adopted a different tune. The pleasantries were gone and replaced with firmness enhanced by a slight echo.

“Possibly since the beginning of time, we have been living amongst you on this planet. Do you know of urban legends such as the ‘Devil Tree?’ My kind was probably responsible for that. Now, I did say ‘probably,’ so do take it with a grain of salt.”

He went silent for a few seconds, continuing to glare at the camera and, to that extent, the entire planet’s population.

“What? Do you not believe me? Do you think my eyes look different thanks to a party trick such as contact lenses? Very well, this is going to hurt me, but I guess I don’t have much of a choice. Bear with me now...”

Slowly, his fingers hooked themselves into the corners of his eyes, cheeks, and mouth. They sunk in…

...And the man proceeded to pull himself apart.

Inhuman screams echoed as he ripped off his flesh like the clothes he wore. Bizarre, spiky protrusions on his back and obsidian-like hide underneath his human flesh exposed themselves. Crimson liquid gushed out and splattered at his surroundings, including the lens of the camera and staining the view before trickling down at a steady pace.

Reactions of all kinds occurred from all over the planet. Some people covered their eyes or turned away, refusing to see more. Some screamed in sheer fright. A few of the spectators even threw up in public upon witnessing the act.

Then there was the small fraction of the population who lowered their heads and gritted their teeth in frustration, severely disappointed at the exposure of their secret.

As the last of his skin tore off, the man stood up from his chair, his appearance now far from human.

His entire body structure now resembled a slender, bipedal demon. From head to toe, part of his limbs, chest, and head was covered in armor-like growths. His head resembled a deformed knight’s helmet with predatory jaws, horned protrusions, and a triangular shape. His amber eyes illuminated within the slit’s dark interior. A tail, long and bulky with a speared tip, swished left and right shortly after emerging from obscurity. His new appearance had the finishing touches of bone-like spikes sticking out of his upper back and shoulders, clawed arms resembling gauntlets, and a glowing mark resembling a distorted butterfly on his stomach.

Slowly he edged himself closer to the camera, giving the entire world a personal close-up of his face.

“As you can plainly see - this is no camera trick!” he declared. After a short pause, he continued. How he spoke had no shred of remorse. ”Now, my fellow brethren are against the idea of having the existence of our kind revealed. Unfortunately, I’m someone with nothing left to lose.”

Walking back to his chair, he lightly scratched his jaw with a clawed finger. ”Hmm... Now that I think about it, my kind does NOT have a classified name.” he pondered.

Slowly, he pranced in and out of the camera’s view while everyone watching his broadcast remained silent in anticipation. Seconds later, he brought himself back into everyone’s eyes.

“Since we generally like to give our own spin of logic to the reality of things around us, how about I ask you all to refer to us as something that doesn’t always follow the natural laws you do? Let it be known that we are, to some extent, still human, but from now on, how about you call people like me as... the Renegades?”

He sat back in his chair. As he held himself still, a fleshy substance slowly grew out of the various parts of his body. They expanded, then converged, covering him until it molded his body into a more familiar shape. As a final touch, hair grew out of his head, every strand working together to form his hairstyle from earlier. When the transition ended, most of his disturbing features were lost. His appearance became human once more.

However, his clothes did not come back, and before anyone watching could gawk, the man reached forward in haste and pulled the camera closer to only show his head and shoulders.

“Apologies… that was too close. If anything, I do not wish for this broadcast to be known as the incident of a man exposing himself to the entire planet. Well... actually I do, but by ‘expose’ I meant the existence of my race, not my indecent exposure... That one’s a serious crime.”

His face contorted after realizing what he just said to everyone watching him. To dismiss his earlier behavior, he pretended to cough into a fist he made in front of his mouth.

“Ahem. It’s best you forget what I just said. Anyhow, I believe my point has come across. I thank all of you kindly for hearing me out.”

He reached forward and shifted the camera to the right, now bringing a big piston engine into its field of view.

“And to those who are currently onboard the Grand Eagle...”

A conjured black mass crept with tendrils onto his left arm, expanding and molding until it shaped itself back into its monstrous gauntlet-like form. This time, it was like a silhouette pulsing with veins of amber. He looked into the camera once more with amber eyes and twisted out an inhuman smile.

A powerful swing of his arm shattered the piston engine into scrap.

As the camera’s view turned shaky, static feedback slowly obscured it as white noise murmured about.

That was the last of the man’s voice to be heard before the entire broadcast faded to black.

On that day, the Grand Eagle, a massive airplane carrying several world leaders and their associates, crashed upon impact with the planet. No survivors were found.

A warning had been given. Elusive beings have been co-existing with humans all along.

Now, how does the planet intend to adapt? 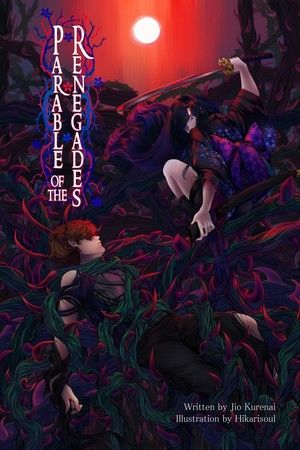 Parable of the Renegades [BETA Version]